Note: I want to give a shoutout to Andrew Chilcott our UK Office lead for his insightful contributions to this article.

It turns out there is a pathway to production for the Raspberry Pi ecosystem, but it might not be in the product form factor you instantly envisage when you hear the words “Raspberry Pi”.

Several readers suggested the possibility when I published my article Raspberry Pi to Production where I outlined 7 challenging factors that made the “Classic” Raspberry Pi form factor production problematic in contrast to a fantastic proof of concept / rapid prototyping platform.  We still stand by the original post and have used the Raspberry Pi as a tool in our proof of concept many times since – which it excels at.

Well, there is another form factor called the “Compute Module” and it looks like this… 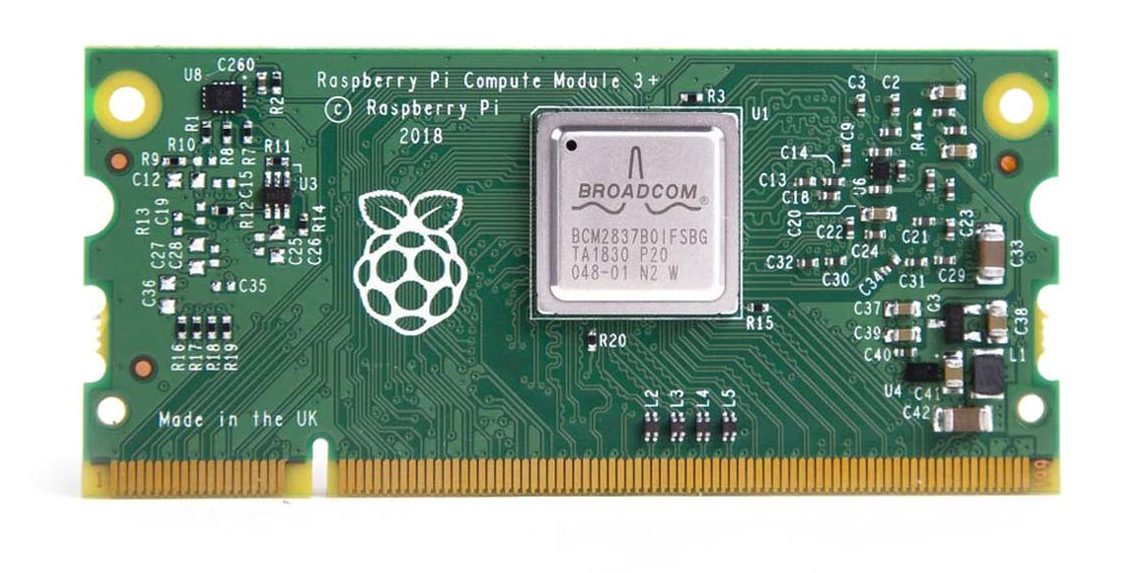 As the story goes, the Raspberry Pi Foundation, with little fanfare in 2014, released the Compute Module (CM1) as an answer to the commercialization challenges of its classic offerings.  However, the CM1’s adoption was slow as it didn’t initially come with any supply chain availability guarantees or significant technical support documentation.  We suspect that the Raspberry Pi Foundation was testing the waters so to speak.

Fast forward several years during the 2017-18 timeframe, when the Raspberry Pi Foundation went all in and released the second and third generation of the Compute Module, the CM3 (2017) and CM3+ (2018) and the adoption rates increased significantly.  The key to higher adoption was that for the first time in writing, the Raspberry Pi Foundation guaranteed 7 years of supply chain availability and it also helped that they improved their technical support documentation.

The Compute Module form factor focuses on “the high-tech bits” – their language – including the processor and memory bus design, fine pitch BGAs, and core power supply in one single package.  As a developer focusing on commercialization – this ‘Raspberry Pi core’ is a welcomed variation as it comes with exactly what you need for the core of the design allowing the designer to custom tailor an optimized custom PCB around it for all the other stuff.

Addressing some of the concerns areas I originally outlined in my first post, the Compute Module removes the peripherals found in the “Classic” Raspberry Pi form factor including external connectors, sensors, wireless and ethernet interfaces, display outputs, speakers, microphones and other features that come at a real cost.

This pare down allows the Raspberry Pi team to sell the CM3+ starting at roughly $25 for the lite version with external memory and roughly up to $40 with a fully decked out 32GB of flash.  For a Broadcom BCM2837 4-core processor, 1GB of RAM and application flexible FLASH densities, this price range is a significant value opportunity and more than reasonable at even small volumes.

As stated earlier, with the guaranteed 7 years of availability, the latest line of CM3+ devices will be available for order through January 2026.  This significant improvement over the “Classic” Raspberry Pi form factor is crucial for commercial applications.  Being able to plan with guaranteed availability is a beautiful thing for purchasing teams and capital investment in R&D.

Additionally, from a future proof perspective, the pinout on the Computer Module has become standardized.  As such, there is every reason to believe that a CM4 module will likely be released in the next year or so (they lag about one year behind the classic form factor variant which was released on June 24th, 2019) and slide right into that same connector on your PCB for an instant processor update.

For most applications the Raspberry Pi is a very good prototyping environment.  With the addition of the compute module, it also becomes a viable platform for production builds.  Where the highest security is needed, we would suggest that an alternative platform should be used – and can advise on this.  However, we have found that the compute module, as long as you take sensible precautions, can be a serious all-rounder.

A way to view the security available on the compute module is to think in terms of the physical access versus network access.  You can fully secure against a network attack by using all the standard Linux hardening tools at your disposal.  But if it is possible to gain physical access to the device, then you should assume that the device can be compromised.  For most industrial applications this is an acceptable trade-off in terms of development costs and time.  We have many designs that follow this guideline and many satisfied customers too.

For applications that demand high security, secure booting, memory protection, anti-cloning techniques and crypto authentication of code then we would be recommending alternative platforms.  This is something that Hallsten Innovations can assist with and would typically be flagged early in the napkin review or discovery phases of an engagement.

Since the CM3+ availability in 2018, Hallsten Innovations has chosen the Compute Module for select client projects and the results have been fantastic.

So bottom-line, there is no longer a need to shy away from a Raspberry Pi based solution just make sure you select the proper form factor for the current stage of development needs!

We would be happy to discuss your Raspberry Pi proof of concept needs and/or discuss our commercialization case studies and successes around the Raspberry Pi Compute Module.

And as always, we are happy to conduct our free napkin reviews.