You dear object, dear machine, dear inanimate thing…you have been lonely.  We know that.

But, a western wind is blowing and times are due for a change- and you’re going to like it. 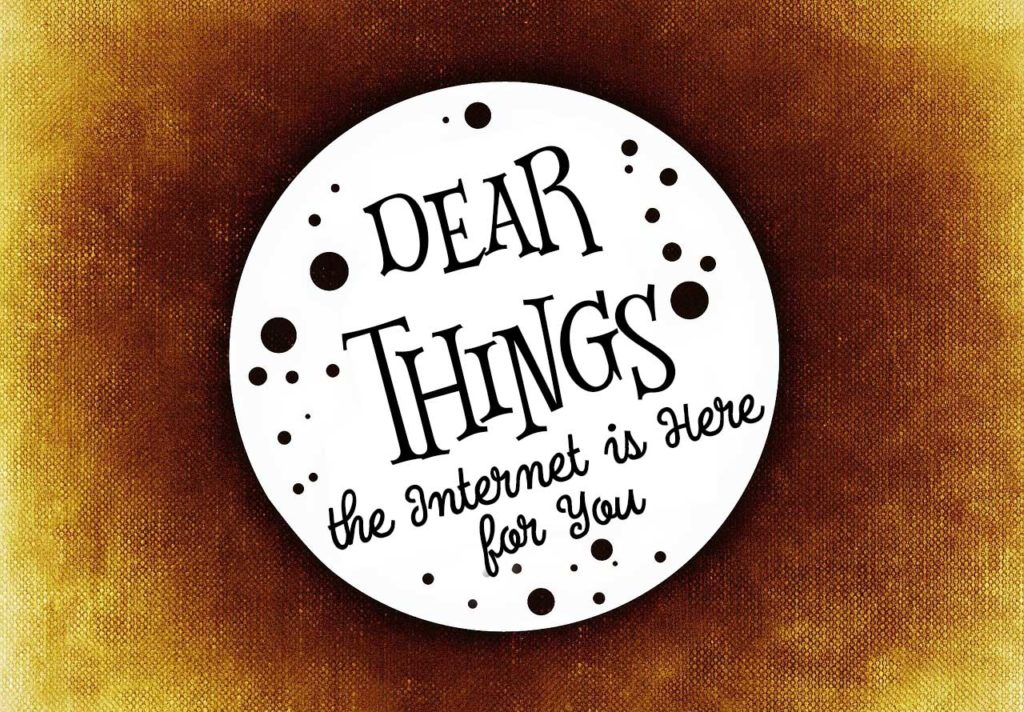 Back in 1999, a human being named Kevin Ashton coined the idea of a new connectivity to and between inanimate objects..  He first wrote the phrase the Internet of Things.  He was talking about RFID tags to track and manage items coming off of an assembly line and onto store shelves.  From Palettes to Shampoo to toothpaste, the ideas was so named.

And in putting a name to the concept oh Things, you and your brethren saw the light of the future.

In 1999, Humans had just graduated from dial-up connections, and they were busy busy exploring the data that other humans produced on the web.  Mostly nerds and early corporate sites, the human created web was still in its infancy.

Over the last 17 years, humans have learned that there is a limit to their abilities to type, photograph, or scan data into the web.  Cat videos and Facebook “look at me” posts aside, hard data about our world was limited by the people being paid to enter that data.

You dear object, dear tireless non-sleeping always awake object, have a power that human beings do not. You can create data continually- and make it available for… well forever.  The Internet of Things is here dear friends.

As our transport and identification friends in the RFID world have known for quite a while, objects that can identify themselves, talk about themselves, and can talk about their environment are actually valuable to humans.

So what does the Internet hold for Things of the Future? Plenty.

The beautiful thing is, humans will pay to connect you to their web.  They see value in your data, lots of value.  A well connected object can measure the environment around it (see our article on a billion sensors), they can identify where you are (no one wants loose cannons!) and just like the Star Trek Enterprise or the latest BMW, objects can return internal diagnostics.  Allowing you to sound the alarm for a human if something is amiss.

More so, specialized computers and cloud computing(in the end, also objects, for those keeping track) manage Big Data- not only slicing and dicing facebook posts, and credit scores, but tracking terabytes of new bytes generated by objects just like you.

Some of your even smarter object brethren are server farms that learn from that collected data – Machine Learning.  Not specifically told what to do by humans, data mining and machine learning objects find trends, learn, create models and discover hidden insights that humans could never achieve.

The future belongs to Things.

Now this is the exciting part..M2M

M2M – for those of you still  in the Shampoo Aisle- that is Machine-to-Machine communications.  Tools and Machines on manufacturing floors, across smart buildings, and spread along smart power grids now have the power to…well.. chat among themselves- delivering unprecedented efficiencies, responsive feedback loops and well managed and reported environments.  Who knows what other things you will meet.

The Internet of Things is a bright spot in the history of … well ,… things.  Hallsten Innovations can help your human owners to add intelligent connectivity to you, bringing you up to speed with the other objects that are riding the wave.